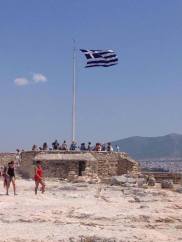 In a recent study published in the Journal of Vascular Medicine entitled “Consumption of a boiled Greek type of coffee is associated with improved endothelial function: The Ikaria Study” (a link to the full article is at the bottom of this post if you care to read it yourself) researchers went out to study the association of coffee consumption with cardiovascular disease by examining the association between chronic coffee consumption and endothelium function in elderly inhabitants of the Greek island of Ikaria. This is the only research of this kind that I am aware of.

Ikaria’s elderly population consists of an isolated rural group with established lifestyle conditions. In fact, Ikaria has been recognised as having one of the longest living citizenry in the world and a high percentage of healthy aging as well. In Europe, only 0.1% of the population lives over 90 years, while in Ikaria the percentage is roughly 1%.

So why coffee? Why Greek coffee in specific?

Coffee is one of the most consumed beverages worldwide. It is considered to be good for the heart since it contains high levels of protective antioxidants and polyphenols. However, what makes Greek coffee superior to your average cup of coffee is its concentration and preparation.

Greek coffee is comprised of Arabica coffee beans, which are ground down to a very fine powder, delivering more concentrated antioxidants per ounce than in a cup of regular coffee. It is also boiled instead of being brewed. This boiling method was developed in Yemen long before the filtration of coffee was introduced. Boiling coffee is also carried out in Turkey and throughout the Middle East. This method creates a foam that the Greeks call kaimaki (pronounced kaee-MAH-kee). The process of boiling coffee extracts much more nutrients from the coffee beans than the filtering method. The combination of boiling a fine grind of coffee bean makes Greek coffee a healthier choice than your classical cup of coffee. Plus, Greek coffee has less caffeine than in an American cup of coffee, so all in all it is a healthier choice.

Researchers in this study found that elderly residents from the Greek island Ikaria who drank boiled Greek coffee at least once a day displayed better overall cardiovascular health. Ikaria has also been researched and documented as one of the regions of the world where people live well past 90 at a significantly higher rate than the rest world. Icaria is referred to as a blue zone because of this.

What’s the secret to heart health and longevity? It may be a daily cup or so of Greek coffee helps. The study explains that being rich in chlorogenic acid, polyphenols, lipid-soluble substances and other heart-healthy compounds, Greek coffee helps protect the arteries, as well as lower your risk for diabetes and boost overall immune health.

Simply put, according to the study, those who drank Greek coffee had healthier blood vessels. What’s more, the new research suggests that Greek coffee protects against endothelial cell dysfunction, a type of heart disease that is particularly concerning to women and is on the rise.

Endothelial function represents the health of blood vessel walls. The endothelium is composed of a thin layer of cells that line the interior of blood vessels, helping them to open and allow blood to flow through more easily. This process keeps blood pressure in check and allows the heart to work less to pump blood through.

However, when the endothelium is inflamed, arterial plaque can build up, a process that may eventually trigger a heart attack. The concentration of heart-protective properties in Greek coffee calms inflammation in the vessels, thus smoothing down the endothelial layer, allowing blood to flow more freely and helping to prevent plaque buildup and ultimately heart attacks.

In conclusion, chronic Greek coffee consumption is associated with improved endothelial function in elderly subjects, providing a new connection between nutrition and vascular health. So what should you go do? Go drink some Greek coffee!